Camping and fishing have their pitfalls.

The snares started when four women departed their vehicles on a Saturday evening to check out and choose a spot to park the camper and a couple of tents. Within an instant, a swarm of mosquitos descended, determined to suck the blood of every human in their path. The little flying demons did not care that the women were on an adventure of relaxation and respite – they were on a mission of vampirish fury. The cloud of skeeters was thick and intense, following the women as they huddled under their hoodies and swatted a path from campsite to campsite. The women had to make a decision quickly and get out the six cans of deet-infused bug spray buried under a mass of camping equipment, fishing poles and foodstuffs.

Thus began Camping Trip 2013 for four lovely ladies. I was one of those lovely ladies (before Saturday morning’s shower and make-up wore off).

The mosquitos were thick this year due to the rain, rain, and more rain of May and June. My friends and co-workers kept warning me before I left that the mosquitos and ticks were going to be horrendous. “They are really really bad! Really bad! Take lots of bug spray!”

I half expected to be carried off in a cloud of bugs, flown over the lake, and deposited into the midst of howling wolves in the forest.

The ticks never became an issue, thank goodness. Most of the time, we were swatting the skeeters and spraying ourselves with Deep Woods Off and Cutters.  Camper’s perfume. We even had moist deet towelettes to avoid the spray of perfume in our faces from the canisters. Between the constant deet application, a campfire and citronella lanterns, we were able to keep the blood-thirsty critters at bay most of the time. I also used the hood of my sweatshirt and the length of the zipper to fend off attacks. Eat through THAT you little varmints!

The only downside was that the 50 layers of deet during the week did have its side effects on Natasha and I. She broke out in a rash toward the end of the week (the sun may have also played a part) and I started growing a third arm and back hair. Thankfully, we’re both getting back to normal. My third arm no longer waves at me and is but a mere red spot on my shoulder. It decided to go back from where it came when I stopped deeting myself and started taking showers every day.

The most serious pitfalls actually came with the fishing boat. The campground host was nice enough to let us use his 14 foot boat for the duration of our stay. How gracious! The boat, however, should have come with a warning label for everyone who entered. It can be a dangerous place. The carnage began Monday morning.

Natasha and I decided to go fishing Monday morning as the two other campers drove off to peruse the flea market in a nearby town. Off we go to the boat with our poles, tackle boxes, deet, sunscreen, cushions, water and Oreos. The boat sat at the end of wooden steps made for people with very short legs. 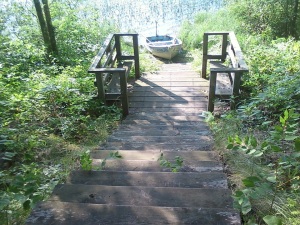 You can’t tell by the picture, but these were baby steps that were awkward to climb up and down. Very strange. The boat sits at water’s edge, among an assortment of weeds. It has to be pushed away from shore and rowed to where the water is clear and deep enough for the electric motor. The motor is then started up and we travel at the speed of light, with G-force torque, to the other side of the lake. I was pushed back in my seat several times while the electric motor gave Natasha all she’s got. Warp factor 1, Natasha!

We made it to the other side of the small lake in about 20 minutes.

Getting back to the push-off, I decided to be a hybrid Queen of the World and Captain Morgan. I put my foot on the narrow seat in the front of the boat and gave a hefty heave-ho, extending my right leg back to the shore in a show of something I will call stupidity. I lost my balance. I fell forward, sideways. I hit my head on the cushion that was on the middle metal seat (I thank God for the cushion), my right knee came crashing down, and a I fell into a lump while Natasha looked on. I scared Natasha for a minute. I scared myself for a minute. I laid on the bottom of the boat wondering if I really hurt myself. Then I wondered how I was going to get up as I was laying on my right side in the bottom of the boat, legs hanging off the front seat. I started to laugh. Natasha was relieved, but she still asked if I was okay. I kept laughing. I was struggling to get up. Natasha asked again if I was ok. “Yes, I am, if I can get #@$%#@ up.”

I managed to find a way out of that strange position and put my backside on a seat. I really was fine, but the knee banging eventually left two ugly bruises. The head was intact, no loose brain matter or blood. Natasha and I had another good laugh and finally went about the business of fishing. We caught a few bass (no keepers) and ended up having a gloriously nice day on the lake.

On Tuesday afternoon, the four campers went out in the boat to fish for perch. Skinny Minnie told Natasha, Red and I that she would push us out of the weeds. “I’m stronger than I look,” were her exact words. Minnie actually waded out into the water to get us going and then tried to hop into the boat.

Yup, I now had a face plant soul mate.

Just like me, Minnie crashed head first into the boat. She survived with only a bruise on her knee. We both have hard heads.

The final fishing disaster came at my hands. Natasha and I had gone fishing every morning, even getting up at 5:30 one day to try and catch something other than an undersized bass. Thursday was no exception, although we slept in until 7 a.m. that morning. It took us awhile to get ready, to gather all of our fishing gear, pour coffee into our travel mugs, and saunter down to the boat. It was a really nice morning, although a bit windy. We were going to hit it for a couple of hours and then go back for breakfast. Natasha motored us to a few spots we had tried before, full of lily pads, weeds and fallen trees. Unfortunately, it continued to be the same story – undersized bass and an occasional sunfish. (Luckily, Red and Minnie had gone out night fishing on Tuesday and caught our one and only meal of fresh fish.)

We were about to give up when Natasha suggested pulling into one more spot for one last try. Okay, maybe we’ll catch something. I got out a top-water bait that had been catching bass, thinking there might be a big lunker out there. I was casting pretty well until I lost focus for a minute. I snagged Natasha with the lure. In the back of the head. I sunk it in pretty good.

Oh My God, I was mortified. Mortified to death. I couldn’t believe I had done that. I couldn’t stop saying “I’m sorry” until Natasha finally told me to quit saying “I’m sorry.” Natasha remained calm, we pulled up anchor and Natasha started motoring at warp speed back to the shore. Then the battery died. Natasha had to row us back. I felt lower than dirt at that point. Six feet lower than dirt. I still couldn’t believe I had hooked my friend. My heart was in the pit of my stomach. We finally made it back to shore and Red took a gander at Natasha’s head. Red suggested a visit to the ER, so off we went to the ER, which was a very long 20 miles away.

It was pretty quiet in the car. I didn’t know what to say. I was focused on driving safely fast to the ER so the hook could be detached from Natasha’s head. I continue to wonder how the heck I did that. I kept yelling at myself, in my head, that I was an idiot. Natasha continued to remain pretty calm while I continued to remain mortified.

We finally made it to the ER and that is where I found my first breath of forgiveness. When Natasha showed the receptionist the nifty decoration attached to her head, she chuckled and relayed that this happens fairly often in a town that attracts many fishing people. She said that they would take good care of Natasha and get the hook out in short order. When the nurse came for Natasha, we heard the same – hooks attached to people are fairly common at the ER, it happens once or twice a week. I felt a little better that I wasn’t the only idiot in town. Next came the doctor, who had a handy dandy little tool to quickly remove fish hooks from flesh. It didn’t take very long. The doctor related that very few fish hook incidents end with infection. It is thought that the saliva from a fish’s mouth acts as an antiseptic. Cool. The hospital also gave her a people catcher’s card with bobber #38 attached.  She was in an elite group of victims. The display at the ER says it all – I’m not the only idiot in town.

Natasha’s wounds eventually healed and I’m slowly getting over the mortification. Natasha encouraged me to go out in the boat, fishing, the very next day. There were no incidents. Natasha has been very forgiving, unlike the mosquitos or the hard bottom of a fishing boat. I am grateful and honored to have her as my friend and I swear I will never hook her again.

Thankfully, there were no other incidents of note during our week of camping other than Natasha’s fear of bears (there were none) and the tears that were produced when we got too close to the campfire.

In between the pitfalls, we had an extremely wonderful week of relaxation, girlfriend laughs, and soaking in the beauty of the great outdoors.