“Dear Mother Nature, hey girl, let’s talk. It’s this whole snowing in April thing. Is there something else going on or troubling you? Is it Father Time again and his ever insistent marching on? Listen sweetie, I get he can be stubborn, but please don’t take it out on me or the state of Wisconsin. I love you through every season and change, you know that. So, can we go back to clear and sunny days with a high in the 50s or 60s again soon? Thanks dear.”

When The Daily Post published its weekly Discover Challenge of Perspective on March 29th, I was initially uninspired. That is, until I published a post for the Weekly Photo Challenge that included a story of fall festival and goats. Blogging friend Heather, a/k/a MOSY, left this comment about the view from a goat cam.

“Just checked in. It’s not dark any more. Still no goats but oNooh SNOW!

“Don’t speaketh that word (snow). We’re suppose to get some of that CRAP here.”

I really wanted to punch the smile out of her smiley face. As I read that, it was snowing here in Wisconsin. In April. I was done with winter and any love of snow in early March, when we had abnormally warm weather. I had gone for walks and bike rides and dreamt of tulips and daffodils. This way of thinking is unrealistic in this part of the Northern Hemisphere, but nonetheless…

So, it finally hit me. Not only does Heather have a different perspective on the beauty of snow this time of year, but my perspective of snow also changes from November to the last snowflake in March, April, or, on rare occasions, May. While Heather is like a seven-year old child, eyes wide open, waiting to try out a new sled, I am the curmudgeonly neighbor mumbling, “Bah humbug!” While Heather, a resident of Australia, suffers the indignities of an average winter temperature of 15C (59F), here in Wisconsin we are delighted to have an average January high of 20F (-6.66C). The average annual snowfall in Wisconsin is 40″. It appears snow does fall somewhere in Australia, maybe, but given Heather’s response to it, I imagine she rarely sees it in person.

I love first snowfall, even though it signals the onset of winter. Most often, first snowfall in Wisconsin comes in late November or early December and is something like what we had on April 2nd…wet, one or two inches, may or may not stick to the ground. Occasionally, like this past December, our first snowfall is a snowstorm or blizzard. On December 28, 2015, after the whining of a non-white Christmas subsided, the area in which I live received 12.2 inches of snow. The city was a winter wonder train wreck, with vehicles getting stuck in the middle of the road and plows having a tough time moving the wet, heavy snow. In one sense, the virgin white snow clinging to the pine trees and many other surfaces had the feel of a professional winter photo on a postcard…beautiful and serene! In another sense, the owners of the vehicles in need of a tow and those that had to hand-shovel the snow from their driveway saw the negative side of winter.

As children in the frozen tundra, our perspective of winter and snow is both naive and self-centered. We are wide-eyed as young children, anxious to put on cold weather gear and make angels in the snow. Or ride a sled downhill. Or make a Calvin snow person. Or have a snowball fight. Or simply trudge around in the snow until we’re cold and wet. Then we go inside where a mother serves us hot cocoa and dries our clothes so we can go back out in an hour and do it all over again. We don’t care how cold it is outside, we simply want to be in the snow. We don’t think about the potential dangers because snow is fun. We don’t care if it snows six or eight or twelve inches, because it usually means that school is closed. We get to stay home and play in the snow. 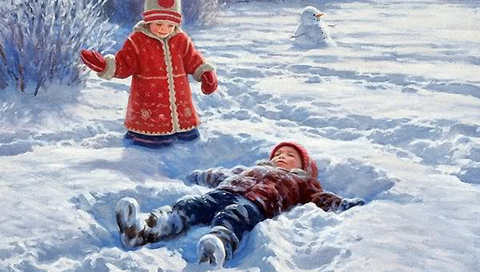 Then, at some point, that changes.  Children become teenagers, then adults. We no longer play in the snow. Instead, we brush it off our vehicles, drive in it, shovel it, go to work in it, and sometimes curse it if it falls in a month that’s supposed to bring rain rather than snow.

A different perspective for a different space in time.

During the winter months, my own perspective of snow changes with each month and each snow event. As I said, I love the first snowfall of the season, maybe the second or third. Snow on Christmas Eve is always welcome, but as January comes into full swing, any of the shine associated with white flakes starts to lose its luster. Perhaps because January is our coldest month and snow often comes on winds from the northeast. Brrrrr. February is no better. This is cabin fever month, when Wisconsinites start to dream of temperatures above 32F and no snow, although the snow still shows its pasty face. There are times during January and February when snow is acceptable, when it falls in big flakes, straight to the ground, with absent wind. Those times call for a four year old and her mom, standing in the middle of it, tongues extended to catch a flake. That is the quiet beauty of snow, when I can’t quite be mad at its falling.

The beginning of March was a warm one for many in the northern U.S. Wisconsin had days in the 50’s and 60’s, when the normal high would be somewhere around 35 or 40 degrees. The east coast had the pleasure of temperatures in the 70’s. Not typical. Then spring arrived and it seemed the weather reverted to its old habits. Wisconsin had snow on Saturday morning and, by the various posts on Facebook, it appears the snow fell overnight in Connecticut, New York and other east coast states. The week here, through Thursday, holds the possibility of more snow with colder than normal thermometer readings and gray skies.

You can guess that I’m not excited about the forecast. It is the time of year in which snow holds no joy for those in this neck of the woods. We are done with it. Done, done, done. No more. We want green grass, budding trees, the leaves of spring bulbs shooting through the soil, blue skies, sunshine, warmth. No snow.

That is the perspective of a northern grinch. Bah humbug.

So, dear southern peeps and Heather, please hold onto your snow joy until late November or early December of 2016. At that time, you can smile and cheer and get overly excited to see snow falling on our land. It is totally appropriate and acceptable, and I will welcome that. Until then, well, you’ll simply have to be patient and settle for a few photos to get you through the next eight months.

20 responses to A Snowy Perspective