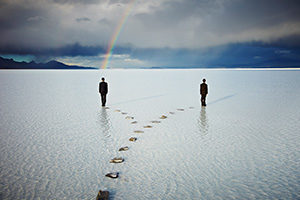 In early November, 2012, prior to the Presidential election,  I left a church I had been attending.

Inside the weekly bulletin was a sheet of paper, with both political candidates named, comparing where they stood on certain issues. It was an obvious attempt by the leaders of that church to sway my vote to what they considered the moral “Christian” vote.

Excuse me? My political stance is no business of any church. I walked out that Sunday, fuming, never to return. I had already made up my mind who I was voting for and I found this sheet of paper an insult to separation of church and state, Christianity and my political freedom.

The First Amendment to the Constitution reads, “Congress shall make no law respecting an establishment of religion, or prohibiting the free exercise thereof…”

On the website for the Bill of Rights Institute, I found an interesting article in regard to an 1802 letter Thomas Jefferson wrote in to the Baptist Church in Danbury, Connecticut. The first two paragraphs of this article read:

Thomas Jefferson wrote to a letter to a Baptist Church from Danbury, Connecticut, in which he explained his beliefs about federalism and the meaning of the Establishment Clause. Jefferson did not address the subject of state-sponsored churches, but assured the congregation that the federal government could not interfere with their church or offer special favors to any particular sect.

He wrote, “I contemplate with sovereign reverence that act of the whole American people which declared that their legislature should ‘make no law respecting an establishment of religion, or prohibiting the free exercise thereof,’ thus building a wall of separation between Church & State.” This phrase became so famous that many have come to believe it is in the Constitution, though it is not. Jefferson’s letter has been used by the Supreme Court, including Justice Hugo Black as “almost an authoritative declaration” as to the Founders’ intent for the Establishment Clause. However, Jefferson’s views on the First Amendment are complicated; two days after he sent the letter, he attended a church service conducted in the House of Representatives.

This leaves me with the question, “What was Thomas Jefferson’s wall of separation?”

A friend of mine recently posted a meme on Facebook regarding separation of church and state. Even though our views differ both politically and in religious faith, we agree on this matter. I believe, in this current day, that the intertwining of religion and politics has become a misinterpretation of justice and scripture. One that promotes judgment, division and the worship of false idols.

I have to believe this is not the society our founding fathers wanted for the United States of America. We are supposed to be a melting pot of both political and religious freedom. These freedoms should never be glued together, manipulated, or used in a manner that demoralizes, denigrates, ostracizes or makes fun of any one person or their beliefs.

Yes, of course, a politican can have a Christian faith and those of us who have this faith can pray for our government and political representatives. We can vote based on our own spiritual and earthly beliefs. To go beyond, however, invites brokenness on both sides.

Here’s the deal. I’m tired of political parties that claim to be the voice of Christianity and of Christians who worship false political idols.

Jesus Christ is the chosen one, no one else.

I’m tired of being told to read Bible verses so I “understand” why I should vote a certain way.

I’m tired of Christianity turning a blind eye to the behavior of their politicians when actions are immoral and illegal, then turning around and loudly complaining about a Christmas coffee cup that has hurt no one.

On the other end of the spectrum, I’m tired of politicians who hold up the Christian “carrot” in order to win votes.

I’m tired of politicians who claim to be Christian, but line their pockets with money from lobbyists.

I’m tired of politicians who offer thoughts and prayers, but never any action to resolve serious issues.

Politics and religion never mix in a good way. Neither seems to be a subject one can talk about these days without getting into a heated debate over opposing opinions. Facebook, Twitter and social media in general are filled with angry disagreements and taunting memes over the two subjects. It’s a cacophony that is disheartening and tiring.

I wonder what Thomas Jefferson would think of today’s society. Since he attended a church service in the House of Representatives over two hundred years ago, would he think it acceptable? In the U.S., Christians are walking a fine line between honoring their God and worshiping politicians who are no more worthy than the rest of humanity.  As well, I see politicians abusing or using faith to further their career and be re-elected. I’m ready for the binding together of religious and political factions in the U.S. to end. For Christians to keep politics from entering their faith and church. And for politicians to stop using the “faith card” in order to claim their side is somehow heavenly sent.

My current church keeps politics out. Our pastors never preach on the subject or tell us how to vote. Our faith community is a mix of liberal and conservative, of differing ethnicities and incomes, a gathering of humanity. Yet there are no heated political debates in our building because we’ve chosen to love each other, love people and worship our God. Political beliefs and voting choices stay outside the church doors.

While the majority of America’s citizens are Christian, our country is also home to other faiths (Judaism, Muslim, Hinduism, Buddhism) and to those who don’t subscribe to a religion or a God. Is it fair if the political landscape of our country is based on the religion of majority? Is the minority then represented by their politicians or are they just another group of people to be dismissed and ignored as lesser than?

Know and understand this is simply my opinion. If you disagree, that’s fine. We’re all entitled to speak our own beliefs. I ask, though, that your comments are thoughtful and respectful as I don’t want to add to the anger on social media.

What are your thoughts on the subject? Can we begin to separate politics and Christianity in a way that might better serve our people and country?  Do other countries struggle with separation of government and religion?

17 responses to Separating Faith and Government