“Music has always been a matter of Energy to me, a question of Fuel.

Sentimental people call it Inspiration, but what they really mean is Fuel. I have always needed Fuel. I am a serious consumer. On some nights I still believe that a car with the gas needle on empty can run about fifty more miles if you have the right music very loud on the radio.”

This past Saturday, I spent most of the day with two friends, at an indie music festival in the City of Appleton. Mile of Music was at Mile 6 of the festival, which means there has now been six years of original music performed by artists you probably don’t hear on mainstream radio.

Artists who are local and artists from all over the country.

My favorites from the day?

Motherfolk – High energy that I wish I could bottle

There are so many acts during the four days of Mile of Music that it’s hard to choose between rock, pop, country, blues, blue grass, jazz, funk, rap, the ukulele band, Brazilian samba drumming, screaming guitars and much more. I’ll be heading back again next year, trying to find new favorite acts and fueling my soul with musical energy. 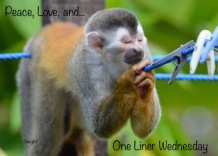 This post has been brought to you by music, music, music. If you are wondering what “One-Liner Wednesday is all about, CLICK HERE.

Linda G. Hill is the Queen of One-Liners and rules over her kingdom of followers. Check out last Wednesday’s post and commit yourself to join the Queen’s one-liner army this week because there’s no fighting or blood, only comradery and fun with words.

15 responses to Fuel for the Musical Gas Tank