“Congress shall make no law respecting an establishment of religion, or prohibiting the free exercise thereof; or abridging the freedom of speech, or of the press; or the right of the people peaceably to assemble, and to petition the Government for a redress of grievances.”

~First Amendment to the U.S. Constitution~

Much has been debated this year regarding freedom of speech, freedom of the press and freedom to peaceably assemble.

From Civil War statues, to the media, to football players, to many other issues in our society, we’ve taken a turn for the worse when it comes to honoring our Bill of Rights and loving our fellow citizens.

I agree. The First Amendment allows us to speak out, to voice our opinions, to call for action when it seems that the government or country is headed in the wrong direction. That is why we have elections, rallies, peaceful protests and personal opinions. That is also why we live in a democracy.

And I have something to say about this.

There is nothing in the First Amendment that address statues, football fields or men kneeling on the ground.

It’s about having the right, within our laws, to have freedom of speech and freedom of action.

Without name-calling, finger-pointing, and all of the negativity that appears on Facebook, in blog posts, and on the TV screen.

And without harming others.

It’s about living together as one people, one country.

Without prejudice of race, color or religion.

It’s about respecting and accepting those who don’t look like you, think like you or agree with you.

Without judgment and hate.

It’s about having a society that is open for all to speak their minds and hearts and ask for redress.

Without pushing important issues aside or ignoring same.

I’ve said it before and I’ll say it again. What this country (and the world) needs right now is love and respect for their fellow human.

Life is too short to take our rights for granted. So many people in the world live in poverty and despair. They live without homes and running water. They live in countries where there is no freedom of speech or religion or they flee from a country that inflicts pain and suffering on their citizens.

And here we are, worried about football players that kneel.

And statues that offend.

Yes, I watched football on Sunday, because I believe in free speech. It’s not a threat to our flag, it’s a reminder of our democracy, the fact that we can make a peaceful public statement and not be thrown in jail or have our heads cut off. This is no different than those that believe the Civil War statues should remain standing. It’s our right to these opinions and beliefs.

I plead with you.

Learn to love, to not judge, to take care of your neighbor, and to respect others’ First Amendment rights. So we don’t have to worry about kneeling and statues ever again. 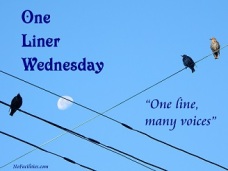 This post has been brought to you by the U.S. Constitution and peace dammit! It has also been brought to you by Linda G. Hill’s “One-Liner Wednesday.” All you need to play along every week is an awesome one-liner and follow a few rules. Birds on a wire are not required, but make sure you link back today’s post to HERE so the rest of us #1linerweds peeps can read it.

42 responses to A Plea for Redress and Respect