Trinity Lutheran Church of Appleton was founded in 1915 with 15 charter members and three children. Construction of the Allen Street church (shown below) began in 1923 after Trinity’s congregation outgrew its small chapel at Oneida and Harris streets. The building was dedicated in 1925.

Sadly, this church and its history will soon end.

I came to know the lower level of the church several years ago when I began volunteering for Loaves and Fishes of the Fox Valley. This non-profit, well-run organization provides a free nutritious meal to the community on Monday, Wednesday and Friday evenings. This is a nondenominational Christian outreach that welcomes all guests to dinner. The fare is usually well received and volunteers normally hear many “thank you’s” while serving trays to moms, dads, single adults and children. I don’t know how long L&F served meals at Trinity Lutheran, but it came to an end this past November.

“In May, the Trinity congregation voted to accept a $1.4 million offer on its riverfront property. The neighboring property, Fox Banquets, is also being eyed for redevelopment. The Appleton Common Council previously considered the church and banquets properties for a new Appleton Public Library building, but the site was rejected in June 2015.

It hasn’t been disclosed what kind of development is expected to go on the site, but officials in Appleton have slated the space as “mixed-use” in drafts of the city’s downtown plan rewrite. Those plans are not final, and are expected to be amended before being voted on this winter.” ~Appleton Post Crescent~

I couldn’t find additional information on whether the new owners, One Lawrence Street LLC, have announced their plans for the future of the sites where Trinity Lutheran Church and Fox Banquets now stand. It’s a prime site if you consider its location on a bluff, overlooking the Fox River.

Trinity Lutheran voted last May to sell the church and its property as the number of congregants had diminished over the years. “I can’t help but feel a little sadness,” stated member Jean Goffard. “The building was a vessel for people to carry out the church’s message.” The congregation has taken some of its memorable artifacts with them, like stained glass windows and a baptismal font.

The following gallery are photos from inside the church, obtained from the internet. I would have added photos from the lower level, when Loaves & Fishes were still operating at Trinity, except I never took my cell phone inside when I served.

Thankfully, the congregation of Trinity Lutheran has found a home at another Lutheran church until they can find a place that suits the size of its members. As well, Loaves & Fishes, after finding temporary residence at the local Salvation Army, is planning a move into the activity center of a local Catholic church in a few months. I’m excited for L&F and its new home. It will be good for them and their guests to permanently plant their feet.

In this gallery are most of the door photos that I took a few weeks ago, when there was a little bit of the white stuff around. It seems surreal to me that, at some point, this church will no longer exist. I have seen churches vacated, but never one torn down. I hope, as a Christian, that God will lead the people of Trinity Lutheran to the exact place He wants them to be, and to remember that when one door closes, another one will surely open.

The back entrance where the guests and volunteers for Loaves and Fishes entered.

This section, probably a school, was added on later.

One of the few doors that I shared with Norm during the year. 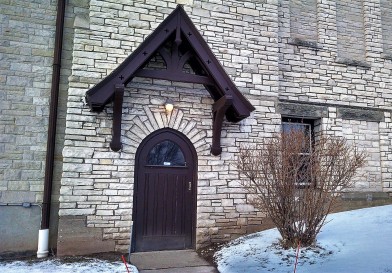 Main entrance into the church.

From the back of the church, in the main parking lot.

This post is part of Norm Frampton’s fabulous and weekly Thursday Door series. Go take a gander at his post-of-today HERE, then scroll down to the blue linky frog thingy and click on it to see a plethora of doors from your fellow bloggers.

30 responses to When a Door Closes…