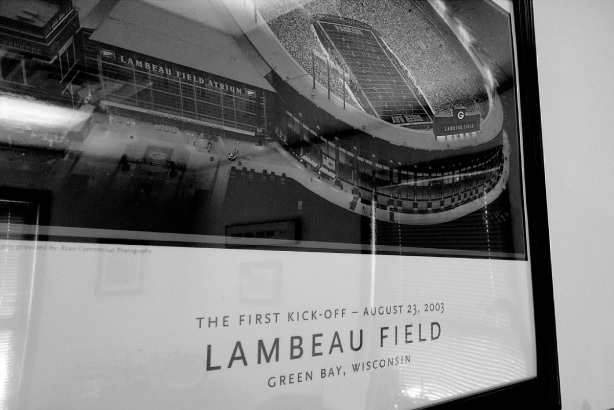 Hanging on the office wall, reflections and all…

For this week’s photo challenge of NAME, I chose to take this photo as “my team” prepares for an NFL play-off game at home, on Sunday.

Readers and followers of MJM know that I am a life-long Green Bay Packer fan and generally love the sport of football, both pro and college. I attended games annually (once a year with the girls) at Lambeau Field for a good chunk of Brett Favre’s tenure at quarterback. I haven’t been so fortunate during the Aaron Rodger’s period as tickets have become too high-priced for my pocketbook. I did go to a pre-season game last year via a neighbor’s generosity, but Aaron didn’t take the field on that day.

Lambeau Field is a special place for fans of the green and gold. Lambeau’s history is long and rich, with many notable players and coaches standing on its field.

“The home field of the Green Bay Packers of the National Football League, Lambeau Field, opened 60 years ago in 1957 as City Stadium, replacing the original City Stadium at East High School as the Packers’ home field. Informally known as New City Stadium for its first eight seasons, it was renamed in August 1965 in memory of Packers founder, player, and long-time head coach, Curly Lambeau, who had died two months earlier.

Lambeau Field is the oldest continually operating NFL stadium. In 2007, the Packers completed their 51st season at Lambeau, breaking the all-time NFL record set by the Chicago Bears at Wrigley Field.

Although the capacity has more than doubled since Lambeau Field was opened, demand for tickets remains high. The Packers have sold out every game since 1960, and at least 115,000 names are on the waiting list (with a reported average wait time of 30 years).”  ~ Wikipedia~

I can attest that there is nothing like stepping inside the home stadium of your favorite sports team. The first time I did, I experienced goose bumps and the odor of food-cooking tailgaters. The Packers didn’t win every single time I sat through a game, but I would say that most often they did. No matter what, the joyous feeling of being at a game with the other crazy fans, yelling DEE-FENCE at the top of my lungs, and smelling concession-stand sausage never gets old. I’ve been to Lambeau when the temperature is 70F and I’ve been to Lambeau when it’s 25F and snowing. Some fans have sat through the bitter cold at Lambeau, which is also referred to as “The Frozen Tundra.” A historic 1967 championship game between the Packers and Dallas Cowboys, known as “The Ice Bowl,” when the kickoff temperature was -13F (-25C), helped to cement The Frozen Tundra of Lambeau as one of the coldest stadiums in which to play football.

NOTE: I refuse to go sit outside at Lambeau when it’s sub-zero and that may make me a bad fan, but I believe in keeping all of my fingers and toes in the warmth of the living room and on the safety of the couch.

In closing, if you are a Green Bay Packer fan who has never been to Lambeau, I highly encourage you to experience this venue at least once. Come in October or early November if you want to avoid the really cold weather. Come an hour or two before the game to wander through the tailgaters (some may invite you for a drink or a game of corn hole). Come and see the crazy fans with faces painted, special outfits and cheeseheads. Come and walk inside Lambeau and feel the electricity. Come watch the Packers win.

This post has been brought to you by The Daily Post’s weekly photo challenge. Click HERE to check out the other NAME submissions for this week.

26 responses to Name of the Game