I’ve desired to do this since early spring.

It took me until October to comply, to get in the car and go.

I had to go and breathe in memories.

My earliest memory of home and life itself was the two-story house we lived in on School Street. It was on an odd corner, shaped like a wide “V.” We moved from this house when I was very young, as it would be torn down in favor of a gas station. I have two distinct memories from this house:  1) Mom standing on a chair because a mouse was running across the floor, and 2) hiding upstairs because the family doctor made a house call for my sick brother. My recollection of the details of this house is vague or lacking. There are only photos as reminders, most of which were taken inside or near a white picket fence. 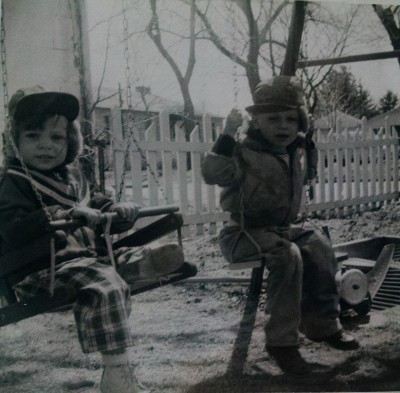 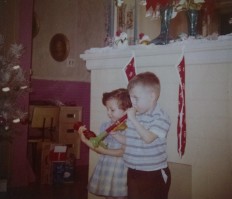 I certainly don’t remember the Pepto Bismol walls in the background.

While I’ll always remember dad, the lamp remains a mystery.

When I was four, we moved to a house on Eighth Street, where the family would stay until dad’s employer transferred him to another city. I was 16 when that occurred, having to leave lifelong friends and make new ones my senior year of high school.

I remember the Eighth Street home being so much bigger than this.

Forty-two years later, the house and yard seem small, while the trees in the front yard have grown very tall. The current owners have a lot of raking ahead.

While living in this home, I learned the truth about Santa; I earned an allowance by scrubbing the linoleum floors; I cracked a front tooth when I fell out of bed, onto my face; I snuck into the parents’ bedroom closet to shake wrapped Christmas presents and ponder why they kept (sanitary) “napkins” in the closet; my brother and I tunneled through the snow in the front yard and built a ramp for our sleds in the back yard; I was fearful of a dark basement, especially the food pantry that was in a far corner; I attempted to teach myself to play guitar; I had teenage crushes on Bobby Sherman and David Cassidy; I obtained a Social Security number and started working in summer and after school; I learned how to drive a red, stick-shift Volkswagen; mom taught me how to cook and dad taught me how to sew; I found out I liked beer, but not martinis; I was baptized, received first communion and learned about Catholicism; I was a pretty obedient kid, except for that time I went swimming at the quarry after school and didn’t tell mom. 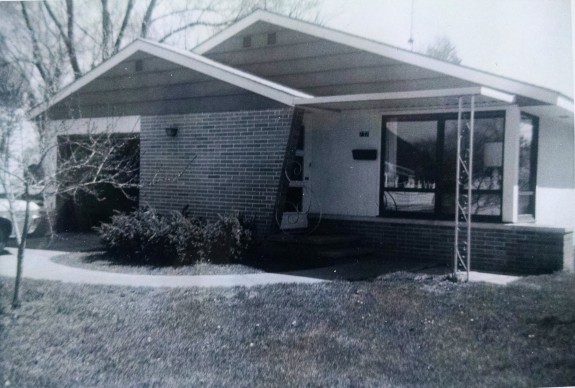 Touring my hometown was an exercise in how things change and how things stay the same. Gone was the high school I knew, replaced by a much larger grade school, a learning center, tennis courts and a soccer field. I suppose when the population almost doubles in what is still considered a small town, the schools must grow and expand. The high school has tripled in size and relocated to the other side of town, at the top of a hill I used to navigate with a bicycle.

“How strange it is to view a town you grew up in, not in wonderment through the eyes of youth, but with the eyes of a historian on the way things were.”

The building that used to house St. Mary Magdalene’s Catholic Church stands empty, while its more modern version stands proud on top of a hill, down the road from the high school.

The Rosa Theater remains in existence and continues to show movies to the city’s residents.

The Pennebecker (apple tree) farm stand doesn’t appear to be in use and its trees looked like they needed a little TLC.

The bandstand in the town square remains, as do the Friday night concerts in the summer. It’s been a tradition for over 100 years.

Unrecognizable is the former dime store downtown, with its wooden floors. It’s been replaced by a modern interior and facade.

Brainard’s Bridge Park is as pretty as I remember it. South Park and Shadow Lake continue to provide a spot for picnics, fishing and swimming…with a few improvements.

The A&P grocery store that my dad managed has been replaced by a Kwik Trip gas station. If you are a resident of Wisconsin, you will know that Kwik Trip’s are everywhere…much like Starbucks and Subway. So, this was no surprise to me.

The hospital in which I was born has been rebuilt and the parking lot expanded, to meet the needs of a growing community. The grade school building that I attended is now used by the hospital.

This was a special time to remember a part of life that was pleasant and the experiences that began to shape an awkward girl with glasses as an individual.

As I was sitting on a bench at Brainard’s Bridge Park, listening to the sounds of a gushing October stream and breathing in the memories of this place, I felt contentment and peace – the warm fuzzies which comes from knowing and feeling home with flesh and bones and soul.

It felt awesome to breathe.

This post was already in the beginning stages when I realized it might fit into this week’s Discover Challenge of Mixed Media. Click on the link to check out other submissions.

31 responses to Breathing in Memories