I’m pretty sure Dan has become excited merely by the title of this post, as he should.

Today is Norm’s Thursday Door Day, a WordPress blogging sensation as far as I can tell. I’ve wanted to join in the excitement for some time now, but never had a proper subject. I pass many doors during the day, but they all seem so boring, without character or a story. It took a trip to Green Bay to find a door worthy of a blog post.

And, if a door isn’t enough for you, National Train Day is on May 14th and it is “beer time” somewhere in the world.

One positive that comes from my brother’s visits is that he likes to explore the area’s eateries and brew pubs. (The negative is the calories that usually come with the explorations.) This past Saturday, after a walk through a botanical garden, we headed over to Titletown Brewing Company for lunch. Beyond the huge statue of a Green Bay Packer with Donald Driver’s #80, the main door to the restaurant greets its visitors. 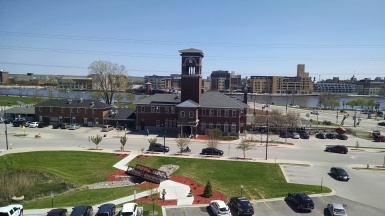 From the “baggage room.” Notice the train on the clock.

The door to heavenly food and drink.

The Titletown building was originally the Chicago & Northwestern Railroad Depot, built in 1898 and 1899. You can read all of the depot’s history HERE.

“During the depot’s golden age, it was a bustling hub of activity. Thousands of families saw their loved ones depart for war or reunited here after its end. Among the most famous visitors were Nat King Cole, Buddy Holly, and three presidents: Taft, Franklin Roosevelt and Eisenhower.”

My brother and I have visited Titletown Brewing Company before, enjoying good food and thirst-quenching craft beer. However, on this day, the sibling had another reason to visit. “Want to go on the brewery tour? I’ll buy the tickets.” Being the good sister and lured by a free ticket, free beer and a souvenir glass, I said “Sure!”

While beer brewing still occurs at the restaurant/former train depot, Titletown and its investors purchased a former cannery building across the street in order to expand its brewing capabilities. Larsen Canning Company first occupied the building in 1898, but the site itself was the former location of Fort Howard, a military installation occupied during the War of 1812.  The newest Titletown brewing facility (with a ground floor tap room and rooftop bar/patio) sits in the middle, while “The Cannery,” a new restaurant and market, occupies space to the south.  On the north end of the building, remodeling has begun to create space for business and shops. The owners and investors have a good “thing” going here, having opened their expansion on Broadway Street in 2014. 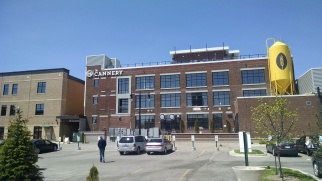 The Cannery: Restaurant and food market

This section will become office space and shops.

Say it loud and proud and vertical.

But you want more doors, right?

I have those too. How about we start with the door to the mash vat?

What I found interesting during the brewery tour is the cost of equipment. We didn’t discuss the cost of the mash vat. However, the big fermenting vats are about $50,000 each. Titletown had six fermenting vats in one room (you do the math). Only the owners and their accountants know the total value of all equipment – vats, bottling line, kegging machine (from Germany), piping, etc. – not to mention the grains and hops they need to purchase in order to brew their adult refreshment.

The Titletown tap room and rooftop bar and patio boast very cool doors. Or are they windows? I’m not sure. 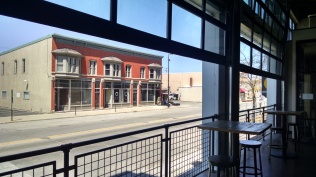 In the tap room, the door-windows open to a view of Broadway Street.

The door-windows open to a rooftop patio with a view of the old train depot and the Fox River.

The bar on the rooftop is an inviting space.

During the tour, participants are given a plastic cup and wristband. We are allowed four half-pours of the plastic cup. Unfortunately, I was the designated driver that day and I am also a weenie when it comes to imbibing in alcohol. So I allowed myself two half-pours and a soda.

The piece de resistance of the day, the final photo for this post, is not a door, but something that wowed every member of the tour group. It was fabulous, an item that belongs in every home and work place…for an end-of-the-day reward or for a reason to keep going on a bad day.

This is not a bubbler with foamy, brown water.

This, my friends is a BEERBLUR.

Yes, I drank from it. And then I walked through the doors of an elevator, happy as a clam and excited that I finally had material for Norm and his fabulous door people.

31 responses to Thursday Doors, a Train Depot, and Beer