That’s what a co-worker and I text to each other when the railroad crossing nearest to the office has its gates down, the red lights are flashing and there is a multi-car train passing through. It’s happened several times to both of us, on occasion making us late for an appointment or when returning to work from lunch.

Sadly, when I took this photo, I missed the TRAIN!!! by two minutes. I wanted you to get the true feel of the stop and wait.

National Train Day is May 14, 2016. National Train Day marks the anniversary of completing the transcontinental railroads in America. This day was created and started in the year 2008 by Amtrak and is celebrated annually in the month of May. This is an event for the lover of all things related to trains.

I do not happen to be a train lover, but I am a tried and true “follower.” So, when Dan at No Facilities, asked a small group of bloggers to write a post about trains to commemorate National Train Day, I immediately succumbed to the pressure.

Oddly enough, the National Train Museum is located a mere 40 miles away in Green Bay. I seem to remember visiting the museum once, many years ago, but I haven’t had the urge to visit again. Trains are like airplanes to me. They are there, meant to be used as transportation or cargo transport, but nothing to be revered like a motorcycle or bicycle. There’s no tantalization to draw me to conventions or rallies or museums relative to either.

But I digress. I agreed to complete a train post, per Dan, and that is what you will have.

“Appleton, Wisconsin is crisscrossed by the former main lines of the Chicago and North Western Railway (southwest-northeast) and the Milwaukee, Lake Shore and Western (roughly southeast-northwest, and now largely abandoned except for local service to area paper mills and other industries). A north-south branch of the former Wisconsin Central Railroad passes on the west side of the city. All rail service is now operated by Canadian National Railway. Appleton has no intercity passenger rail service, although studies are being undertaken on the feasibility of extending Amtrak service to the Fox Cities and Green Bay.” ~Wikipedia~

The Fox Cities are comprised of the communities of Neenah, Menasha, Town of Menasha, Appleton, Kaukauna, Kimberly, Combined Locks, Little Chute, Town of Grand Chute, and the newly formed Village of Fox Crossing, with various little townships surrounding these communities. Throughout the area, waterways and train tracks are in good supply. The train above sits on a north-south track, not far from the south side of Neenah. The former husband and I moved to the Fox Cities circa 1978, in this part of town. At the time, Neenah was lacking a bridge or two over the railroad tracks to prevent frustration on the part of motorists. There came a time when the city finally realized they needed to build a bridge over the railroad tracks that crossed Cecil Street. (I was unable to find historical data that would remind me of the year it was built.) 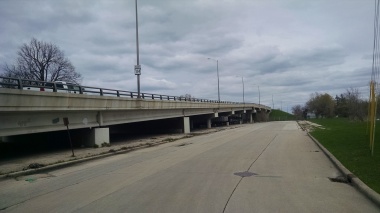 This particular bridge was sorely needed as the tracks that crossed the street were part of a switching yard. Many locomotives and train cars came to a dead stop in the middle of that street. Then the train would move slowly forward, then slowly back, then stop, and repeat the process several more times before allowing drivers to pass. The Soo Line came through town at that time and their company name would appear in the newspaper several times, fined for overstaying their welcome on the tracks that traversed the street. In trying to research regulation as to how long a train can block traffic, I came up with a few responses of 10 minutes. One website stated, “No local ordinance exists that governs the length of time that trains may occupy road crossings.” I am unsure if an ordinance existed in Neenah in 1978, but I believe the fines were related to ambulances not being able to reach their critical destination, in a timely manner, due to train blockage. That’s not a healthy occurrence. Complaints about trains blocking the roadways continue to exist today, especially in the Town of Menasha (the town is now called the Village of Fox River Crossing). The city of Neenah eventually built two additional bridges over the railroad tracks, one further south and one over a main road leading to the downtown business area. Unfortunately, there will be no bridge to go over the tracks near the office. We’ll have to wait a few minutes in order to let the train pass.

For this post, I took a drive around the Fox Cities for photographs (Dan owes me $5.00 for gas) of crossings, trains and whatever else I thought would be of train-related interest. What I am about to share is not a comprehensive view of railroad crossings in the area, but rather a glimpse of crossings and tracks in the cities of Neenah, Menasha and Appleton. 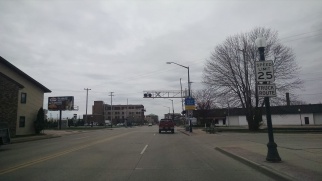 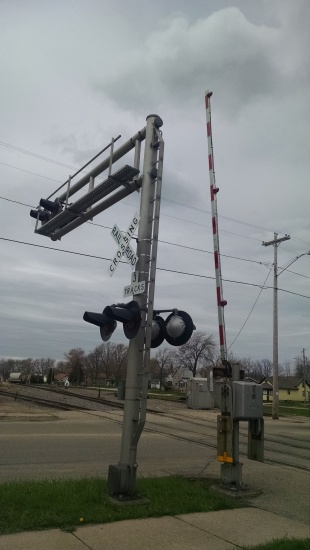 1. To push or pull (a train or part of a train) from the mail line to a siding or from one track to another.

“Their train had been shunted into a siding”

Shunting, in railway operations, is the process of sorting items of rolling stock into complete train sets or consists, or the reverse. In the United States this is known as “switching.”

So, there you go. Everything you need to know about shunt and shunting. Who knew? There’s plenty of that going on around the Fox Cities, especially with the majority of trains carrying freight to and from the paper mills and factories.

The remainder of photographs come from a working, but very old railroad bridge that cuts across a portion of the Fox River. (I could not find any historical information of when the bridge was built or the rail company that built it.) This bridge is located in an area known as The Flats, which is a river valley near Lawrence University and the downtown of Appleton. Click on this LINK to get a better view of the surrounding scenery.

There isn’t much else to tell about the rail system or trains in the Fox Cities, unless you want me to spell out the history of every railroad company that’s ever been present.

I didn’t think so.

If you are truly interested in trains, I recommend a trip to the National Railroad Museum, followed by a tasty lunch and craft beer at Titletown Brewery in Green Bay. (My brother likes the beer, so that says something.) After this, feel free to drive south to the Fox Cities and enjoy the many railroad crossings that appear during your trek around the area. For you never know, you may be witness to flashing red lights and a speeding train while sitting still in your vehicle, texting your best friend…