I had originally planned to be on vacation the entire week between Christmas and New Year’s Day.

Instead, I had this  marvelous idea: I would go into work on Tuesday, when it was quiet, and start relieving the office of its dust-covered, no-one-really-wants-it junk. It appears our office will be moving before summer of 2016 and there is absolutely no need to move items that belong in the dumpster or at Goodwill. I knew that over the 15+ years I have been at this location, an accumulation has occurred – one that has assimilated every nook and cranny of available space, including a back hall closet.

The snowstorm delayed my plans by one day, but Wednesday was as good as Tuesday.

After checking emails upon arrival, which I told myself I wouldn’t do (but did anyway), I began the purging. Two a half hours late. The best laid plans…

No worries. Once I started on the intended targets, it was easy to keep going. Making executive decisions to free oneself of useless or seldom-used stuff can be very cathartic, especially when it’s not really your stuff. It’s like a breath of fresh air after your lungs fill up with the inch of dust invading the crap in the closet. *cough, cough*

Much like purging junk at home, the riddance of junk at work brings up many questions.

Why do we have so much of whatever this is?

What were we/was I thinking when we/I bought this?

I hope we don’t need this tomorrow.

What the heck is this?

(Note how I led into the continuation of the “What the Heck?” series.)

I ran into a few items of note, which you may or may not know. The first item took me back many, many years. I almost kept this as an antique. Can you guess the piece of junk in this first photo?

How about the second? I have lots of them. They are still available; however, if other offices don’t need to take these off my hands, they will find their way to the recycling bin. Dear Useless Junk Collectors, I’ll be happy to share the location of the recycling dumpster if you are desperate for short, round, gray tubes.  You only need to bring the McGyver tool that will allow you to pry open the lock of said dumpster.

Photo of Useless Stuff #3: I was perplexed when I came across this piece of plastic something, until I opened up both ends of the contraption. Oh, I get it… 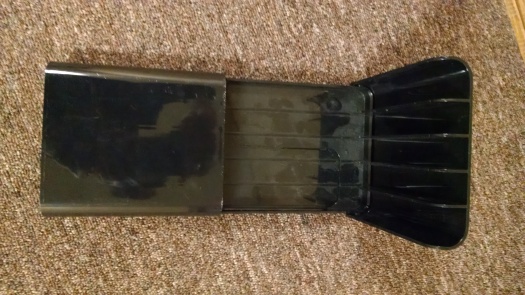 Please excuse the dust. I don’t know where this came from, but it found its way to our office. At one time, it seemed that peers in other offices thought it a good idea to bring their boxes of junk to our central office in an attempt for all junk to co-mingle and somehow be attractive to others who also brought their boxes of junk.

Instead, the stuff simply procreated.

All boxes of outside junk are now banned in an attempt to reduce the population and bring order to an otherwise chaotic pile of crap.

I found a few additional items of interest in the back hallway closet. 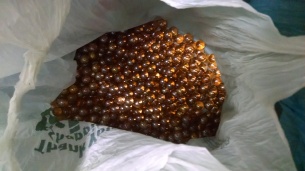 An overhead projector of antique status, a bag of decorative marbles, and plastic leis from the dollar store. Feel free to ask questions, I know you have two or three.

The one item of interest in our office is binders. Used and like-new and never-used binders. Many, many binders. I did not take a photo, but they are there. One of my co-workers went through a portion of the binders and threw the worst of the worst in the recycling/garbage pile. We keep hanging onto them in the hope that someone will take the paper organizers off our hands or we will need many binders for a very special project, but Hope never appears. She is afraid of the sinister hoarding monster and tends to hide in a clean and organized corner of the office. Wherever that may be.

I did have success, however, in throwing the cumulative junk, the hoarder’s collection, into the two metal dumpsters near our office.

Ninety-five percent of this pile resided in the back hallway closet. Stuff taking up space. Dust-covered junk. The nightmare of Hope. Garbage that should have seen the dumpster many moons ago. I am excited and happy over the outcome of this purge.

This closet? Formerly filled to the brim. No free space whatsoever for Hope. She would have had to lay in the life-saving air pockets in between plastic paper trays.

There is more stuff to be thrown out. I have not touched the kitchen area (where plastic containers without lids and crumpled holiday napkins reside) and none of us have started on our own work spaces. I’ll be calling the shredding service a few times between now and the move. Boxes will be saved and filled and additional items that elicit questions of What the Heck? will be found. This will be our winter to spring to office move eradication.

So, my fellow bloggers, can you venture a guess on the three mystery items? What the heck is this stuff? What are the questions you have about decorative marbles and leis and overhead projectors?

What are the dust-covered, seldom-used pieces of junk that your hoarding monster is unwilling to give up?

I am submitting this post for the weekly photo challenge. You will find a few circular photographs within this post, as well as those of other bloggers HERE.

30 responses to What the Heck? *Office Edition*