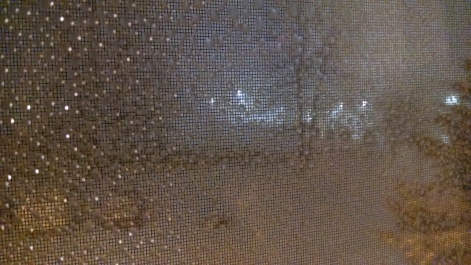 Winter was born in Wisconsin overnight.

The feet came out mid afternoon.

Yes, I said feet. Considering how the weather has been during late fall (which we usually call winter), it’s only natural that there is a breech birth. Natasha equates this to a C-section, because Dude Winter didn’t want to come out and play.

We went from a dusting of snowfall through December 27th to a blizzard called Ashley that left 12″ of snow on the ground.

I had intended to go to work today to spend a day cleaning our office of junk as this is a quiet week devoid of interruptions. Instead, I am writing a post in my jammies, drinking coffee, watching daytime TV, waiting for the sound of the snow plow. It’s late morning and there is no sign of the vehicle that will assist with an escape. I would guess that given the amount of snow, it will take more time for its appearance than if we had a mere four inches of the white stuff.

Photos from a second story window don’t quite do justice to a blizzard and its aftermath. 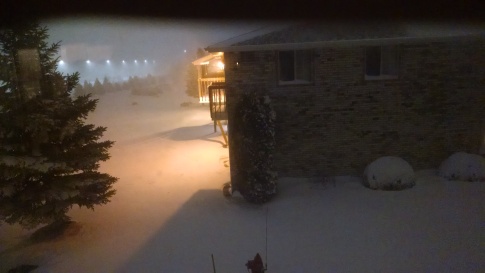 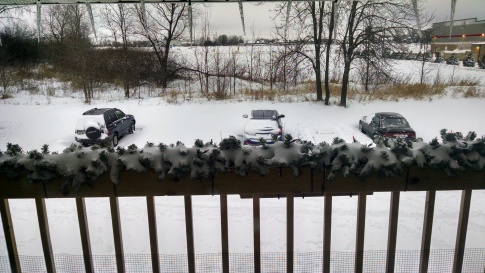 Northeastern Wisconsin doesn’t have blizzards of this proportion every winter. Quite often, our snow is cumulative from multiple snow events of anywhere from one inch to six to eight or nine. The last time we had an epic blizzard, I had a day off from work. The entirety of state government had a day off because the blizzard covered most of Wisconsin. In my many years of employment, this is the only time that we were given a snow day. Most areas received 12-15 inches of blowing and drifting snow.

I remember another blizzard, somewhere between the years of 1989 and 1992. I was employed in another city, about 20 miles away. It was December and I was to experience a long and stressful drive home. As if the snow racing sideways across the highway and the hour to travel 15 miles wasn’t the worst…I entered the on-ramp that would lead me across a treacherous bridge over a wide spot in the Fox River, only to come across a stalled car sitting in the middle of the roadway. “No! No! No!” was the cry from my lips. One thing that many winter drivers learn is that once the car is moving through heavy snow, you do not stop. For any reason. As long as it doesn’t harm or endanger self or others. The on-ramp had not been plowed and I knew that once I stopped…

Dang! I was stuck, but the worst part was that my bladder was ready to explode and I was a half mile away from a gas station. I needed to get myself out of there. So, I remembered a trick that the former husband had taught me – to rock the car back and forth, alternating from reverse to drive, to find momentum that would allow forward motion.

Forward I went, around the motionless vehicle, across the bridge to the gas station. Thank God. After a visit to the restroom, I passed beer in the cooler. I had become so stressed over the drive home that I was ready to buy the big boy can of beer and take it home with me. Wisely (or unwisely?), I left it sit in the cooler. I had a couple of miles of city driving to find home and the last thing I wanted to happen was have a large can of beer in the car if I got stuck or in an accident. I may have bought something to eat, like a candy bar, but I don’t remember. I only remember the bladder and beer.

And, now, back to real time.

I hear the plow. It has cut a path through the umbilical cord of winter. The baby’s cries have lessened to a whimper as he knows he is here to grow and growl through the next three months and finally die as an old man when the crocus poke through the softening ground. Gone is the rain and mild temperatures that held onto fall and the first few days of official winter. Snow is here. Cold is here. Winter is born.

Blue candy cigars for everyone.

16 responses to Ashley: The Birth of Winter