She let out an exhaustive sigh.

“Mom, would you rather take your wheel chair today?” asked the daughter. “Are you tired?” 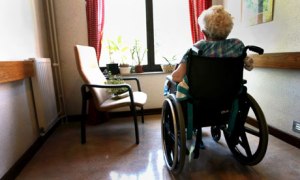 The elderly matriarch nodded in affirmation and turned the walker around, her wrinkled right forearm resting wearily on the handle bar as she struggled to walk back down the hall to the waiting wheel chair.

The week prior, daughter noticed her mom was struggling to use the walker that had been assisting her for several years. It was quite the effort to make the numerous steps out to the car, into the restaurant, back out to the car, into the building and down the hall to the shadows of her two-room apartment. The daughter had thought it was simply a physical “tired out” day, similar to days when her mental acuity is most unwilling to forgive.

Today, she thought differently. The effect of 95 years of breath and a recent stroke have taken their toll. The woman who had grown up through the Great Depression, lived through almost half a dozen wars and conflicts, voted in 18 Presidential elections, got married, bore two children and carried memories of so many years was tired. A tired that smacked the daughter with an awakening blow.

She let out a perceptive sigh of acknowledgment.

“Okay mom, let’s get you into your wheel chair.” With a bit of navigation and help from daughter, a shaking hand grasped the worn arm of the wheel chair and the mother plopped herself down into a tired-free zone, one in which she could rest for the journey out to the car. On the way out, she stirs up enough energy to bark a familiar command, “Make sure you lock the door!” The daughter complies with a “Yes, ma’am.” This is one of the matriarch’s repetitive orders, an action she has control over, not understanding that daughter has heard it a familiar number of times. As one of the aides stated on a separate occasion, with the knowing wink of her eye, “Thank you for reminding me.”

The mother is wheeled to daughter’s parked vehicle and a struggle begins again.

There is a system in place for the injection of the elderly woman into the front bucket seat of an SUV. This day, it is complicated by the wheel chair, having to rise to her feet and find her way through the process. The usual places on which to grasp don’t seem to be there, although daughter always provides trust in the guise of a helping hand. The mother eventually turns 180 degrees and sits on the edge of the seat; she turns her frail body to the left, legs assisted in; she grabs the handle above the door and the daughter helps her move into place. “Are you okay, good?” the daughter always asks, and the mom always replies, “Yes.” The seatbelt is fastened and the daughter heaves the wheel chair into the back of the vehicle.

The next two hours are condensed into a trip to the mother’s favorite restaurant with additional exercises in insertion and ejection from the SUV. The energy expended for this movement is a thoughtless ease for the daughter, but a monumental ape on the back of the mother. It is too damn difficult. If not for the prospect of release from her apartment into the sun, a not-the-usual-crap lunch, and an adult refreshment, she might make a permanent dent in her easy chair on most Saturday afternoons.

The daughter is saddened this particular Saturday. Her mother seems so very tired and it appears that the use of her walker on their lunch outings may have come to an end. The daughter is not sure what future weeks will bring, if the mother can find enough strength in her aged body to leave the wheel chair at home or if the mother will be resigned to its use. In either instance, the daughter will be there to help her manage the Saturday exercise as long as mom is willing.

The ride home on Saturday is uneventful, except for the words quietly spoken by the gray-haired lady to her attentive daughter, after a conversation about the mother’s deceased family and husband. It came out of the blue.

“You can never leave me. Don’t leave me.”

Daughter holds back the mist and answers, “No mom, I won’t.” She will not leave the woman with the walker, the woman in the wheel chair, the tired woman who struggles to stand up and sit down. The daughter promises and the mother asks one more question.

“Did you lock the door before we left?”

The physical body may wear out, but the energy of repetitiveness never tires.

12 responses to Lock the Door