I ran into Walgreen’s to buy dish gloves.

On the end of the aisle, my eyes were drawn to a long, brown, furry toy that crinkled and squeaked. It was a dog toy and it was perfect… 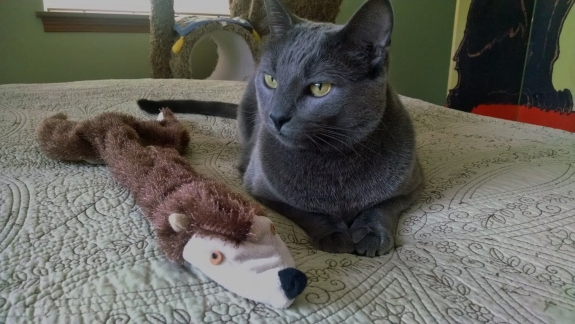 Natasha discovered some time ago that Gibbs loves the crinkly plastic that packagers use around jars and boxes and whatever product it helps seal. He comes running when he hears the noise, much like Pavlov’s Dog salivating at the sound of a buzzer. Natasha calls the crinkly plastic “kitty crack.” The issue with the plastic is that Gibbs wants to sink his teeth into it and chew and would probably eat it if we let him. We dare not leave him alone with the focus of his desire.

When I saw the dog toy and heard the noise it made, I was excited at the prospect of a safe crinkly toy for Gibbs. When I brought it home and showed Natasha, she immediately said, “Go rub some catnip on it!”

Ziva barged in first, for a few minutes of rolling in the “nip,” and then Gibbs pushed Ziva out of the way and got his paws on the crinkly creature. 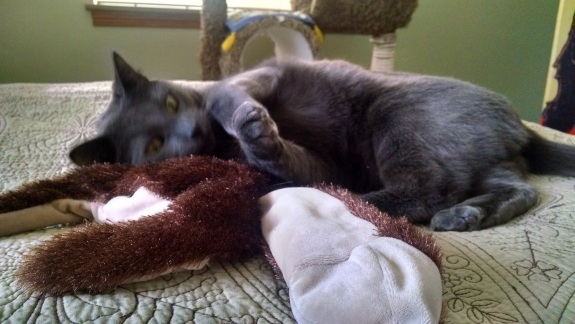 Then Gibbs had to take a nap and eat before he came back for more.

Another 10 minutes of play, then his eyes glazed over and Gibbs laid spent and motionless. 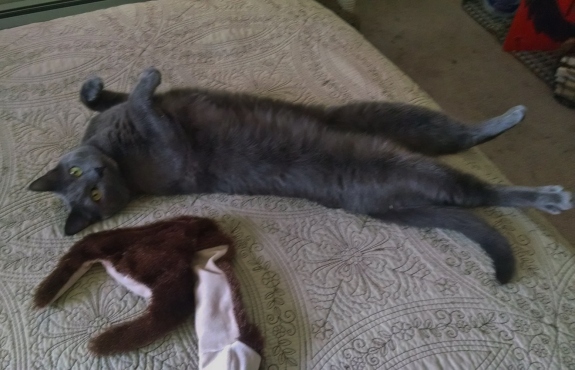 Because that is what happens after the crinkle and the nip.

19 responses to The Crinkle and the Nip