It ended with a chair and ottoman, an act of kindness. It began with faith, cemented by the urging of a friend and the kind words of an apartment manager. In between, a few gifts made an appearance, wrapped in a Let’s Make a Deal box and red bow.

Natasha and I had been looking for a place to rent starting last fall, but I had just renewed a one-year lease and was hesitant to make a move. We had a spacious duplex looking us squarely in the eye and I flinched. Then the polar vortex happened and there was no way we would move on a -20 degree day. When spring finally sprouted in April, the two of us kick-started the “let’s rent together” project. We looked at duplexes we couldn’t afford, apartments that were too small and a house that was trashed by the family that was still in the process of moving. Natasha and I would get our hopes up over the next rental prospect, only to be dashed by “that won’t work” or “not enough space” or “that place was interesting” (but not really) or “it smells funny”.

We must have picked the mule behind Door #1.

The purging, sorting and packing were the time-consuming, never-ending bastions of unpleasantness. The daily tread up and down the stairs with boxes and odd-shaped pieces of our lives took the place of the gym’s Stairmaster. Every day, for three weeks, Natasha and I had to put one foot in front of the other and carry on…strong, blue babes were we.

No, we are not trading the mule for an ox. What would we feed him?

So, you are wondering where we ended up living. Funny how the road traveled can lead back home, to where you started. From the get-go, Natasha had said, “Too bad you can’t just move in with me, but they don’t allow pets in my building.” Yes, it was too bad. It kept us looking at other places and we finally found an apartment that caused us to raise our thumbs and say, “this is it!” We immediately put in our applications and the owners of the property ran our credit checks and checked references, which caused them to raise their thumbs. In doing so, Natasha had a conversation with her manager that went something like this: “I (Natasha) really like it here, wish I could stay, but you don’t allow cats,” to which the manager replied, “Um, yes we do allow cats,” to which Natasha replied, “Since when?” to which the manager replied, “Since I’ve been the manager this past year.” Natasha was dumbfounded for a few moments and then the light bulb went on. She called me, we talked and both agreed I would move in with her since her apartment is as big as the one we wanted to rent together. The place was chosen and now it was my turn to have faith that I would be able to move.

The mule was not allowed at the apartment. Can we trade our ass for something else?

Remember the one-year lease thingamabob that was making it difficult for me to move at will? Nervously, I contacted the manager the next day and told him of my plans. He knew that I had been looking for another place and, bless his heart, he had put me at ease about the whole ordeal, letting me know he would do his best to rent my apartment as soon as I gave notice. Well, here you go buddy. What happens now?

The manager had a young man in need of an apartment on June 1st (in three weeks). He would take over my lease and apartment (as is) and I would get my security deposit returned. It was a short turnaround for the purging, packing and moving, but I took this as a testament to having faith and a dose of readily available karma. The move would take place at the end of May, come a swarm of locusts or high water. The plan for Natasha and I to share rent was coming together in a way that we never would have guessed.

Would you like to trade the mule for an old, heavy analog TV?

Two nice young boys responded to the Craig’s List ad for the behemoth, antique Sony TV that I could never carry down the stairs by myself. It weighed a ton. I was only asking $1.00 and I had no bites until a few days before the deadline when I got a phone call. They would be there in 30 minutes. Two underweight, barely 20, young men grunted that TV down a flight of stairs and into the back seat of their four door mid-size vehicle. I’m still wondering if they got it out of the car without giving themselves a hernia or crashing it to the ground. Regardless, it was kind of them to take it and I was relieved that I didn’t have to ask my manager to haul it away.

At the same time that Natasha and I were utilizing the Stairmaster, another friend of mine was also moving to a different apartment. We talked one Sunday about the TV and the fact that she was trying to get rid of her fairly new green couch that she couldn’t seem to give away to save her soul. “Do you want it?” the friend asked out of kindness. “You can come and look at it.” We did and Natasha and I now have a green couch. Free to a good home. Two strong men from the moving company helped retrieve it and carry it off to the new place. Natasha and I have already decided that this is a “I’ve laid down and I can’t get up” kind of couch. You know, something so soft and cushy that it envelopes, surrounds and prevents one from leaving. It almost ate us the first day it parked itself in the living room.

And what else is behind Door #3? 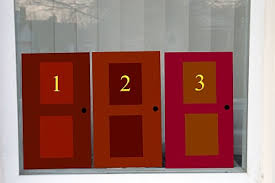 The kindness of a neighbor and a hotel ridding itself of the old and replacing with the new brought us a chair and ottoman. Free to a good home. We could not believe it…a grand gesture by this lovely woman who lives next door filled an empty spot in the corner of the living room. And the green in its pattern matches the couch.

Monte, is there anything left?

You bet your sweet bippy, there is! We have won empty boxes, a mostly organized household, companionship, a pair of naughty but relaxed cats, a budgetary savings and a building filled with the nicest group of apartment dwellers who take our “free to a good home” assortment and hang out with us on Memorial Day. Natasha and I have won the grand prize, the box with the red bow, filled with faith, kindness, and gifts we did not expect.

Although, we could have really used the mule with all of those boxes.