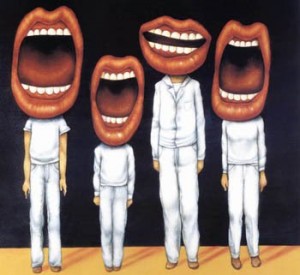 As I type this next post, I am equally tired and irritated. I have neighbors who like to talk.

I live in an apartment complex and I have found from past and present experiences, some humans do not understand the term “voices carry”. It is especially unrecognizable to them during hours of darkness, when vampires roam the earth and most day-shift people sleep. The neighbors in the building across from mine are oblivious to the sounds emanating from their lips during this time of night, keeping me awake as I count the rotations of the ceiling fan above my feet.

Last night, the “blah, blah, blah” continued for 30 minutes . . . long enough for irritation and the slamming of a bedroom window. I believe they heard the “hint” as the cacophony ended about a minute later.

People! I don’t want to hear personal tidbits about your life or your mother’s sexual exploitations while you smoke and let your little doggie pee at 11 pm. The smoking and dog peeing are OK. The talking is not. Talking in a loud voice is OK for the mall, at an amusement park, at a loud music concert, at a hearing-impaired parent, and inside the confines of your own home or apartment.

Neighbor, I am not sure what goes through your head while I’m counting rotations. “Hey! Let’s go outside when most of the other residents are sleeping and talk loudly! They won’t mind! I don’t think they can hear, but if they do, they would LOVE to hear about all of my mother’s boyfriends and how you don’t have a job and how awful everyone else is because they are not nice like us!”

Yes, I know they are not thinking that, but what else then? Is it a matter of humans becoming so wrapped up in themselves that they don’t realize how their actions affect others? What is it?

When I was married and living at a different zip code, a duplex renter behind the apartment building would make a fire in the fire pit quite often during the summer. This would not have been a bad thing had he and his wife not proceeded to haul out the beer, yell at their kids and talk exceedingly louder as they grew increasingly drunk. The cops were called many times and they were eventually evicted.

On the other side of the apartment building, across the parking lot, was another building (part of the complex) that housed a very special family. You would not see them all day. Not a peep. At 9:00 pm, however, out they would come with their lawn chairs. And their cooler. And their beer. Much like the fire pit people, their loudness was based on the number of beer cans they would empty. One night, it got out of hand as a full-fledged party ensued on the lawn and I don’t believe anyone in the complex was asleep. The cops were called, they were eventually evicted.

I have witnessed other misbehavior of apartment dwelling – loud car stereos, children who aren’t watched by their parents, chairs being thrown through glass windows, food being burned on the stove, fire trucks arriving . . .

You would think I’d be used to a little talking. Sadly, I am not. I’m old and get up early. I require sleep.

A plea to my neighbors: Be considerately quiet tonight. Then tomorrow night. And the night after that. And for all eternity. Quiet.

It’s OK if you want to hang outside and smoke or let your doggie pee.

8 responses to A Talkative Day in the Neighborhood