I have no more carpets to clean, no more pictures to dust, no more floors to mop, no more burdens to bear. The “stuff” within the walls of my apartment is about as clean as it’s going to get. My wish is that I could cover it all with plastic wrap to keep it from future ravages of dust, dirt and spots of fallen food. I’m holding onto the positive cleanliness rather than the negative thoughts of “I’m going to have to do this again next spring.”

I’m excited that the work is done and play/leisure will begin.

Gibbs is excited too. He was not a happy camper Tuesday morning. His home was in an uproar and even though mom was at home, she was not paying attention to him. He cried incessantly for about a half hour and then I heard a kitchen cupboard door banging. I thought he was crawling into one of his usual spots to pout. I let him be and went back to work. When I finally made a trip to the kitchen, I could hear Gibbs rustling around in a cupboard. Or so I thought. It sounded as if he was behind my lazy susan door, but it would have been too hard for him to move it. I looked in the lazy susan and when I didn’t see him there, I looked under the sink. No Gibbs. Then I heard him cry and I started to panic.

I continued checking cupboard doors and couldn’t figure out where Gibbs was hiding (increasing cat mom panic). It continued to sound as if he was behind the lazy susan door. I looked there again. I looked under the sink again. I looked lower. I saw something moving. OMG!

This is how unaware I am at times. There was a piece cut out of the pressboard underneath the sink – the wall that is on the other side of my lazy susan. I never realized that hole existed. On the other side of this “hole” is an empty space behind the lazy susan. Gibbs discovered the hole on Tuesday morning and decided he needed an adventure since mom was ignoring him. He must have thought it was cool until he had a moment of, “Oh no, how do I get out of here?” Thankfully, he figured it out before mom went into hysterics and called the landlord.

“Hello? Yeah, my cat is stuck in the cupboard somewhere and I can’t find him. Can you come over with a chainsaw?” 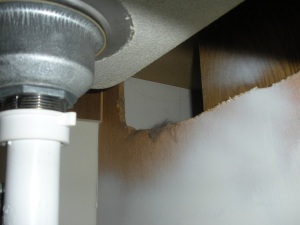 Yes, that is Gibbs’ gray fur hanging on the edge of the pressboard. The hole is now covered with duct tape, but I’m also going to buy the childproof thingies for the cabinet. I’ll fix him for scaring me half to death.

The rest of the day was a bit of a blur for Gibbs. 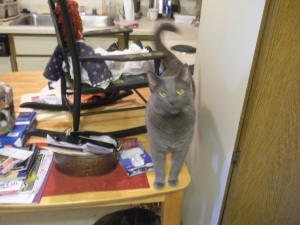 You may be wondering what Ziva was doing during the kitchen cupboard commotion. Well, she took advantage of a new place to perch and see the world as she knows it.

As much as she let most of the cleaning craziness roll off her back, Ziva is happy to have her blankie-lined basket back in its normal location. (Her freight train purrs and snores last night told me so.)

And, just like Gibbs, she is happy to have mom’s attention back where it belongs.

4 responses to Gibbs, where are you?